The signs of heartworms in dogs start in the early-stages and could include a constant dry cough triggered by even the mildest activities.

As a dog owner, it’s vital to understand how dangerous heartworms are, the signs to watch for, and ways to prevent heartworms from seriously affecting your dog’s health. Heartworms that live inside a dog will eventually mature, mate, and product offspring. Left unchecked, the number of heartworms will skyrocket into the hundreds.

Don’t think your dog is at risk? Heartworms have been detected in all 50 US States, in Canada, the United Kingdom and other places around the world.

As the heartworm population grows inside the dog, the outcomes can include:

What Are Some Options for Heartworm Prevention in Dogs?

It’s much easier – and less expensive -to prevent heartworm disease in dogs than it is to treat.

The best way to prevent heartworms in dogs is to provide year-round, FDA-approved, heartworm prevention medication, prescribed by your veterinarian. This medication kills the heartworm larvae before they have a chance to mature and reproduce.

Many of these heartworm prevention medications also protect against other worms and intestinal parasites that can be dangerous for your dog or even be transmitted to humans, such as tapeworms.

The following recommendations have been approved by licensed veterinarians and are considered safe and effective.

This type of treatment is topically applied to the skin where it enters the bloodstream. One application lasts for a month and controls more than just heartworm. You can expect this medication to get rid of:

Heartgard is available through a prescription and is designed as a chewable to be administered once per month. Heartgard prevents heartworm disease and controls & treats ascarid and hookworm infections in dogs.

9 Signs of Heartworm in Dogs

The following 9 signs to watch for are listed in order from Class 2 to Class 4.

As the heartworms multiply they occupy more space and begin to make it harder for your dog to breath in adequate amounts of oxygen.

Dogs will lose their appetite as they begin to succumb to the heartworms. Weight loss is the result of that.

Dogs who progress to this stage may experience coughing and shortness of breath similar to an asthma attack. They could also have fluid build up around the blood vessels in their lungs, which makes it difficult for the lungs to oxygenate the blood, causing rapid and shallow breathing.

As the fluid builds up in the lungs, the dog’s chest may protrude, and the ribs may begin to bulge. The ribs will also become more visible due to more severe weight loss.

An enlarged liver in dogs can be caused by many things. As heartworms multiply, they will also begin to affect other organs including the liver.

Organ failure as a result of heartworms would be considered a late-stage sign.

Heartworms, naturally, gather around your dog’s heart, lungs, and other organs. The longer your dog has heartworm disease, the greater chance they have of breaking down the healthy function of bodily organs including the heart.

As heartworms multiply, they will get into the dog’s lungs, heart, and organs. When they start to take over the lungs, your dog will have difficulty breathing. A veterinarian will listen to the chest to identify abnormal lung sounds.

When to Have Your Dog Tested for Heartworms

Don’t wait until your dog begins to show signs of heartworms to have him tested. By the time a dog is displaying symptoms of heartworm disease, his condition is already serious. It’s also important to note that the test for heartworms only detects adult heartworms, not larvae, so your dog won’t test positive if he has just recently become infected.

If you have a puppy that’s less than six months old, he can start taking heartworm prevention without being tested since it takes at least six months for heartworms to show up in the test. However, he should be tested in six months to ensure he wasn’t already a carrier.

Annual testing is essential, even for dogs on year-round prevention. Although they are very effective, preventatives may not work 100% of the time, you may miss a dose or give it late, or your dog could vomit or spit out a pill without your knowledge.

Read This Next: Why It’s Critical to Stop the Heartworm Life Cycle in Dogs

When it comes to heartworms in dogs, prevention really is the best cure. If your dog isn’t already on prevention, have him tested immediately and talk to your vet right away about a prescription for year-round heartworm preventative. It’s much more affordable than treating an existing heartworm infection, and it could save your dog a lot of suffering… or possibly even save his life.

Nicole is a die-hard animal lover, former vet technician, mom to her two rescue pups, and she grew up living and working at her family’s boarding facility. She loves using her writing talents to share her insight in the hopes that she can help other pet parents out there! Follow Nicole at:  https://twitter.com/nicolermccray

Before you go, please take a second to share..tweet..post…whatever!

Thank you for reading!

Ladybugs the Afterlife and a Dog Blog 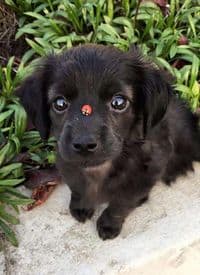