Most dog owners are aware of health changes in their dogs. As experienced dog owners, we have a pretty good sense of whether something warrants an immediate trip to the veterinarian or not.

Unfortunately, bile duct obstructions might not be that obvious in the early stages.

One of the telltale signs that something is going wrong somewhere in the liver or gallbladder is the development of jaundice.

Jaundice occurs when the liver doesn’t excrete bilirubin correctly. Bilirubin (a yellowish pigment that is made during the breakdown of red blood cells) is supposed to pass through the liver so it can be excreted out of the body.

Jaundice can occur in a dog’s eyes, skin, and mucous membranes. You may be able to detect the discoloration wherever the skin is bare.

If there’s a blockage (bile duct obstruction), the bilirubin builds up and eventually finds its way into the bloodstream. The skin and mucous membranes turn yellow from the pigmented deposits left behind.

In this post, we will explain what a bile duct obstruction is, signs to look for, causes, diagnosis, and treatment options.

Dog Breeds Most at Risk of Bile Duct Obstructions

Any dog can develop pancreatic disease. However, the breeds most susceptible include:

What is a Bile Duct Obstruction

A bile duct obstruction (extrahepatic biliary tract obstruction) occurs when the normal flow of bile secretions is blocked from leaving the liver and entering the intestines.

Normally, bile flows from small ducts in the liver to larger ducts. Eventually, it ends up in the gallbladder where it’s stored until digestion occurs. Anything that stops the bile from entering the first part of the small intestine (known as the duodenum) is considered an obstruction.

There are two main bile ducts in the liver: the right hepatic duct and the left hepatic duct, as shown below.

The biliary tree is a group of tubes that collect bile. The common bile duct starts where the liver ducts and gallbladder join, and ends at the small intestine. 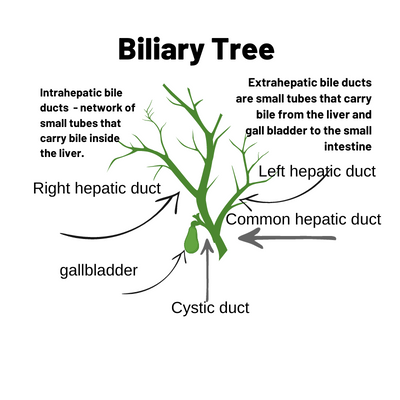 Bile is a highly alkaline, yellow-greenish fluid that forms in the liver. Once formed, the liver secretes bile into the gallbladder until food is digested. In dogs, the process of eating triggers the release of bile into the duodenum.

The main purposes of bile are to excrete bilirubin and to break down fats during digestion.

If an obstruction prevents bile from performing these tasks, it builds up in the blood system. It’s this build-up that causes the skin to turn yellow (jaundice).

Dogs who like to swallow things other than their own food (toys, bones, rocks, socks, trash, etc.) are at risk of bile duct obstruction. These objects can get trapped in the small intestine, where they also end up blocking the bile duct.

Other causes of bile duct obstruction can include:

Pancreatitis is an inflammation of the pancreas. The pancreas is a gland located along the stomach and the first part of the small intestine.

Pancreatitis in dogs is classified as either “acute” or “chronic.” Sometimes, there are even atypical cases that don’t seem to fall neatly into either category.

Signs of acute and chronic pancreatitis in dogs include:

A dog might present to a veterinarian with acute, or sudden, signs of pancreatitis. If the dog has repeated episodes, it’s then considered chronic.

Cholelithiasis is a medical condition that occurs when stones form within the gallbladder. These “stones” are made up of parts of the bile, including:

Gallstones can form if the gallbladder isn’t functioning properly or if there’s something wrong with the bile. Abnormal bile can occur if the dog has:

Gallstones don’t always cause problems for the dog. Other times, however, they can lead to cholangitis, which is an inflammation of the biliary tree (mentioned above).

Diseases associated with the liver, gallbladder, and/or bile duct system can be confusing for pet owners because these diseases can have vague symptoms.

The gallbladder sits between the liver lobes and acts as a reservoir for bile. A canine mucocele (pronounced mew-coh-seal) forms when the gallbladder lining produces abnormally thick mucus.

The accumulation of this thick, sludge-like mucus will stop the normal flow of bile from the gallbladder into the small intestines.

If the mucus continues to accumulate, it causes the gallbladder to expand. The more it expands, the greater the risk of a gallbladder rupture.

If an obstructed gallbladder ruptures, it can be fatal.

4. Cholecystitis (Inflammation of the Gallbladder)

Clinical signs of cholecystitis include:

Tumors of the liver and bile ducts are rare in dogs and account for less than 2% of all canine neoplasms. Source: Canine Liver/Bile Tumors – Long Island Veterinary Specialists.

Liver and bile tumors are known as hepatobiliary tumors. They are divided into one of four types:

The dogs who develop these tumors are typically older dogs. Unfortunately, most neoplasms (tumors) are malignant with a high risk of spreading, depending on the type.

Dogs with liver and/or bile duct tumors usually present with clinical signs of liver disease at the time of diagnosis.

Liver disease is a broad term for several conditions that cause damage or inflammation. A dog may have primary liver disease or liver disease that is caused by something else. It can be caused by bacterial infections, exposure to toxins, viruses, or congenital birth defects.

Types of liver disease in dogs include:

This condition causes inflammation of the bile duct system. In most cases, it’s caused by bacterial or viral infections that find their way from the gallbladder and bile ducts into the small intestine.

Clinical signs of cholangiohepatitis include:

Dogs diagnosed with this condition are usually treated with broad-spectrum antibiotics. Some dogs may need to be hospitalized for intravenous fluids and other medical support.

Liver fluke infections are rare in dogs, but can occur in areas where the problem is endemic. Dogs can become infected from eating raw fish that carry the parasite.

Blunt trauma is a type of injury that happens when you hit your body or something else hard. 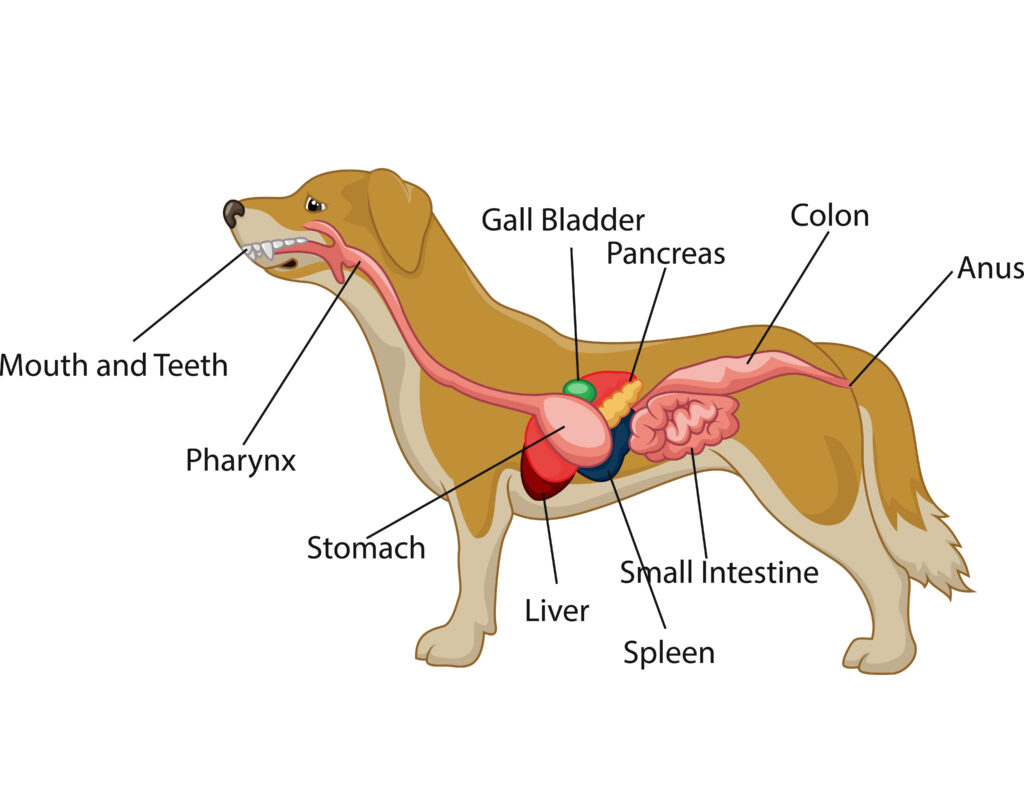 Signs of a Bile Duct Obstruction in Dogs

There are a few things that may lead a veterinarian to believe your dog has a bile duct obstruction. Dogs who already have problems with their pancreas, gallbladder, or liver are especially at risk.

There are a number of tests that can be done to get a definitive diagnosis. The following are examples of these tests.

The veterinarian will first conduct a physical exam to check for signs of jaundice.

Abdominal radiographs are x-rays that produce images of the organs in the abdominal cavity. This test can help detect abnormal liver size, may detect irregular liver borders, calcified gallstones, obstructions, perforations, and tumors.

Ultrasound is considered the “gold standard” in diagnosing problems with the gallbladder. If the gallbladder is ruptured, the dog will require emergency surgery.

Blood tests can help determine if the dog is anemic or has evidence of systemic inflammation or infection.

A chemical blood profile will measure liver enzymes and can detect increased levels of bilirubin.

Veterinarians can also detect elevated levels of bilirubin through a urinalysis.

Dogs with unusually pale stools may be suffering from an excess of bilirubin.

Bilirubin is the pigment that breaks away from red blood cells as they degrade. It’s what gives your dog’s stool its dark color. If your dog’s stool is unusually pale, it could mean that there is a bile duct obstruction preventing bile (which contains bilirubin) from circulating properly.

The veterinarian may perform a test to see if your dog’s blood is clotting properly.

The treatment of a diagnosed bile duct obstruction starts with stabilization. This includes the administration of IV fluids and other supportive therapy. Broad-spectrum antibiotics may be prescribed to control infection.

Further treatment plans will depend on the severity and cause of the obstruction. If cancer is found, surgical intervention will be required.

The most common cause of bile duct obstruction in dogs is due to pancreatitis. In some cases, treatment of the pancreatitis can resolve the issue. In severe cases, surgery may be recommended.

ERCP can be used to diagnose and treat problems in the liver, gallbladder, bile ducts, and pancreas. The procedure involves inserting a specialized tube into the bile duct. This helps release the buildup of bile. When used in combination with x-rays and an endoscope (a long, lighted tube), it can help find:

In severe cases, surgery may be recommended. Cholecystectomy is the treatment of choice for dogs with gallstones or mucocele (benign, mucus-filled cyst).

Cholecystectomy involves the removal of the gallbladder. Although gallbladders can be treated with medical management (medication and diet), it will need to be removed if it is obstructing the flow of bile.

This allows access to the obstruction, where removal of biliary sludge (thickened mucus) can be performed.

If the dog has a biliary tree infection, they are at risk of going into shock during surgery. This is especially true for cats.

Medical management can also include the use of antibiotics and pain medication.

5 Medical Reasons Why Your Dog Has a Dry & Crusty Nose

Are Acorns Poisonous to Dogs? 5 Signs of a Medical Emergency

There are many causes of bile duct obstruction in dogs. However, the main cause is usually related to pancreatic disease. The signs of an obstruction will vary depending on where the obstruction is and the severity.

Any signs of skin yellowing (jaundice), weight loss, fatigue, vomiting, diarrhea, or stomach bloating need to be brought to a veterinarian’s attention asap.

Remember that the signs noted in this post can be related to a number of issues.

I want to take a moment to thank you for reading this post. I hope you found it useful and informative. If so, could you take a second to spread doggy love through social media?

You'll find the buttons at the top of this post and at the bottom of the post.

Also...you might have noticed a little heart at the bottom left of your screen? Give it a click if you want to bookmark this page for future reference.

We use cookies on our website to offer convenient, personalized ads. By clicking “Accept”, you consent to the use of all cookies. You may opt out by using the link .